Finally, a sports writer has the fortitude to write a critical commentary about the conference expansions which have now become routine!


Do caretakers of college sports care?

By Dana O'Neil | ESPN.com
Do they even care anymore? Do they listen to the people at all -- read their comments or feel their frustration?
Do the powers-that-be see people calling college sports a money-grubbing mess and an embarrassment? Do they sense the sarcasm and the cynicism when people talk about Rutgers-Nebraska as a new Big Ten rivalry or say they can't wait for that Georgetown-SMU Big East showdown?
My guess is they do. No one is that tone-deaf or blind.
They hear. They see. They simply don't care.
The powers-that-be and the caretakers of college sports long ago stopped worrying about their pennant-waving constituents or even the athletes carrying the official flag of membership.
[+] Enlarge 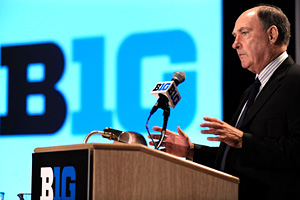 AP Photo/Paul BeatyTurns out Big Ten commissioner Jim Delany will not sit pat at a dozen schools after all.
It became about the commissioners, about their egos and their legacies, about the aphrodisiac-laced cocktail of power and greed. Mike Slive has his powerful 14-team member SEC; Larry Scott got a network for the Pac-12; John Swofford added Notre Dame to the ACC, a huge coup.
Did we really think Jim Delany was going to sit idly by and dither?
No, the Big Ten's announcement that it will add Maryland, with Rutgers expected to follow, is merely the latest in the ultimate testosterone-measuring party to see who can lay claim to the Most Powerful Man in College Sports.
The United States map is the board for the chess game, and the colleges, fan bases, alums and athletes the pawns.
In their world, the Big Ten can have 14 teams, the Big East can go West and Utah and Colorado can lay claim to a Pacific-based home.
In their world, the Notre Dame football program, long chastised for refusing to capitulate and join a conference, winds up looking like a Mensa member. Who in the world wants to join this mess?
What's worse than the inaccurate conference names and skewed geography, though, is what these puppeteers are failing or refusing to see: In an effort to cement their places in history, they are putting cracks all over college sports.
The NCAA will have you believe that runners and agents are the most insidious cancer in the game today, that the notion that athletes are on the take has disenchanted the fan base to the point of no return.
The NCAA is wrong.
The commissioners are the ones on the proverbial take and everyone knows it.

Both Maryland and Rutgers have accepted invitations to join the Big Ten. Which school is a better fit?
Cast your vote!
I can't fault Maryland and Rutgers in this one. It's been a decade since the Terrapins have been truly relevant in a revenue sport. It's been -- well, basically forever -- for the Scarlet Knights.
So if you're a financially strapped athletic department like Maryland and someone dangles the Big Ten Network cash register in front of you, you go.
If you're a dying-to-win homecoming queen but are a destined-for-princess school like Rutgers and someone wants you (other than your crumbling league), you go.
Delany will offer a good argument and a litany of explanations -- for example, that this gives Penn State some East Coast company, that the value added by the expanded television markets enhances the league.
But let's consider: Delany is suddenly worried about Penn State feeling lonesome -- the Hester Prynne of college athletics, the school many thought he should have kicked to the curb a year ago?
And he needs value and expanded TV markets, why? Because the money press he's currently operating isn't churning fast enough?
You can rationalize and argue this all you want and come up with answers and reasons. But there is no real need -- emphasize need -- to do any of this, other than you can and you want to.
And the fans are smart enough to realize it and disgusted enough to be sick of it. They know that all the posturing about the commitment to academics and bolstering competition is babble and that their interests, cares and passions don't matter a lick.
The Kansas-Missouri rivalry? Later. Georgetown-Syracuse? Eh. Duke-Maryland? Deal with it.

Now that the Big Ten is ready to expand with Maryland and Rutgers, Gene Wojciechowski asks the big question: Is it done adding? Story
So your daughter plays field hockey at Maryland, and instead of driving to Virginia you now have to figure out how to get to Iowa to see her play? Deal with it.
So you love West Virginia and try to go to as many road games as you can and can't figure out how to get from Morgantown to Lubbock? Deal with it.
So in financially strapped times your pocketbook is getting lighter? Hey, sorry, we're busy over here trying to make sure the money doesn't come tumbling out of the Brinks truck on the way to the bank.
Deal with it.
Eventually, though, don't we have to reach a point of no return? Of some sort of pushback?
The landscape is a storm-ravaged mess and the last idealistic fan has left the building, seeing this entire enterprise for the sausage-making caper it is.
College sports are gaining money and losing credibility, the sham of amateurism and purity reserved merely for the athletes and their vow of poverty.
People are lemmings. They'll go to the games because they always go to the games. I get that.
But at some point the bastardization of all this has to devalue the very product these men keep talking about adding value to.
So when they are done fighting and scrapping to make their resumes thicker, their legends longer and their statues taller -- when they decide who is the Most Powerful Man in College Sports -- what exactly will be left to rule over?
And more importantly, will they care?
Posted by The Coach